And We Start Again.. 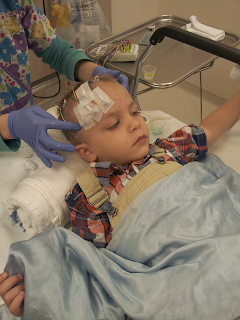 It has been a while since I have updated...We had an overnight EEG last week that turned into a two night EEG. Sadly PJ is still seizing from the right side. He had multiple seizures the first night we were recording with one physical episode. They asked us to stay to try and get more information and information they received...PJ had his worst night, with seizures mimicking the ones he use to have before his first surgery.  It was long and stimulation set him into a hard physical seizure. Needless to say, I was a petrified mess. We were told that his seizures are remaining on the right side and, at this point, not spreading to the left. His flushing episodes are seizures and his extreme fits could be seizures or repercussions of a seizures. Right now the big bulk of his seizures are happening at bed time and nap time but abnormal waves remain steady from everywhere remaining except the occipital lobe (or at least from what the EEG reads anyway). Right now there is a possibility that he is seizing more deeply in the remaining right side making it also undetectable on regular EEG like before.  Right now we are at a place where a hemispherectomy is Paul's best shot at living a normal seizure free life....We are very aware that chipping away at that side doesn't seem to be doing the trick and we don't want to put him through more surgeries then necessary and our gut is saying this is PJ's cure. God has a big plan for this sweet little boy. He has taught us so much already and I pray that PJ and all of us can look back at these couple years and smile knowing how far we have come. We should be hearing back from the hospital this week for further appointments and are really hoping that things roll as quickly as they did last time. We are also, possibly, going to be taking away some more medications sometime soon...but we will see how that all turns out.  It just breaks our hearts seeing PJ suffer. 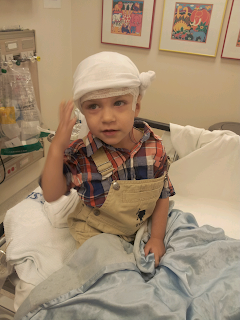