Seizures here lately have been relentless...Grandma even got to experience one of his "Good Morning" seizures before we left for his appointment today.  At this point we were unsure of how much the people at the hospital believed us so we have been recording every seizure with our phones just in case.  Thankfully, we didn't need them as his doctor totally believed everything that was going on.  He told us that he did get some information from the PET scan and his seizure that he had before the scan itself was at the absolute perfect time.  He had just had the radioactive sugar injection about 10 minutes prior to his seizure and any activity in that 45-60 minutes after the injection can be tracked.  They found that the seizure that he had was coming further back on the right side of his brain...  The only bummer is that it is most likely going to impact his motor skills.  To us, right now it is no big deal, he CAN NOT live with these seizures....they are detrimental to his development.  They are causing the speech and cognitive delays and at this point, we feel, he can deal with the motor delay way easier then the speech and cognitive delays.  He wants so badly to communicate with others and play with others but at this point he just can't and you can see the frustration in his sweet little face.  It was so heartbreaking today, he walked up to a woman sitting in on our appointment and stood there staring at her...you could see that he wanted so bad to talk to her. He literally stood there for ten minutes just looking at her right in the face just like somebody would be doing if they were holding a conversation...made my heart ache for him! 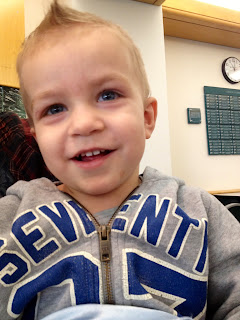 Well onto the doctors plan of action. P.J is being scheduled for an FMRI and after that he will have an appointment with the Neurosurgeon and then will have the Grid placement done which will lead directly to the surgery.  Grid placement is similar to an EEG but they will place them directly on the brain (brain surgery part 1) he had this done the first time around but it was done on the operating table so he didn't have to sit around with them on...this time he will be monitored in the hospital for a while.  This will allow them to see exactly where the problems are and what is "good" brain and what is "bad" brain. It will also tell them what exactly they will be impacting if the area of brain is removed. The doctor said that with as often as he is seizing it should only take a couple of days as opposed to the week or sometimes more it can take (so in this case more seizures are better, yay).  After they get the information he will go straight back and have the dysplasia removed for a second time in hopes of FINALLY being able to know the real Pauly....not the highly medicated, seizing, little boy.  The guessed time frame for all this is two and half or three months till we will be on our way to recovery....I can't help but hope it happens a bit sooner...totally ready to move forward with our lives as a family....without the dysplasia!  So ready or not here we go with our fingers crossed and praying hard....onto a second brain resection!
Posted by Unknown at 4:06 PM