On the 22nd Paul woke up and surprised everyone. He decided, on his own, that he was ready to walk, nearly run, play, and begin communicating. He even said two words together consecutively! Both totally clear! Amazing! We did move to the rehab unit to ensure that things were going as well as they seemed and he blew them away. 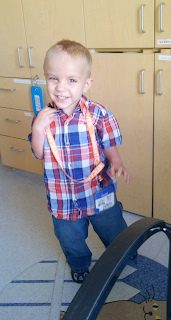 He does have problems with his left arm and remembering it is still there and will need an orthotic for his left ankle just for outings where he will be doing lots of walking to keep him from tripping.  Really though things were not expected to be this well.  Unfortunately, PJ did have a "possible" seizure at night in the hospital.  His eyes rolled back a few times and he began lip smacking then his jaw went tight, he took a deep breath, then went back to sleep.  We were told not to worry to much as it could be the brain healing and not anything related to his disorder....can't lie though, I am worried...petrified actually, but we will see.  I have a feeling though that if he has an abnormal EEG again that they will end up graphing him to make sure he is not constantly seizing again deeper in his brain....maybe not, actually I'll word it better HOPEFULLY not...I would prefer his EEG be nice and normal and us not even need to wait to find out what they would do!   They released us from the hospital Friday afternoon and we were able to bring all our babies home.  I snapped a picture before my oldest had his swim class...which he wasn't very happy about haha! 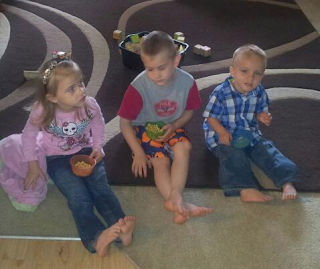 Since being home I have noticed him still flushing a deep red color during his sleep.  I am not too sure what is causing this and will be asking the docs to see what they think....I can't help but fear that the seizures are still at it in there.  He has, however, had a HUGE reduction in his twitching in his sleep and has had a big boost in his balance overall.  Even with his bad leg he seems to be way more coordinated now then before.  His cognition still waivers a bit.  In fact, he doesn't understand if we say more then three or four words to him.  It has to be straight to the point or he just goes "uhhhhhhhh" and then walks off...which could be a result of many things...he isn't at a very cooperative age as it is! Needless to say we will be giving PJ lots of TLC to try and see how we can try and get him to a comfortable level developmentally.
Posted by Unknown at 1:25 PM