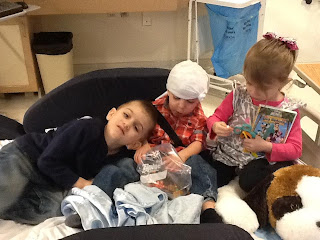 P.J's two night stay at the Children's Hospital.  Of course big Brother and Sister were there for support for a bit Arietta said "Oh, Pauly are you okay???! Were you brave!!??"   :)   I will say though--this little boy was thrilled to have a bag of snacks.  Obviously he couldn't keep his hands out of the bag! 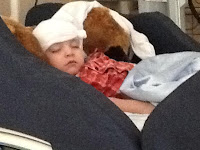 We thought for sure there would be a seizure since we usually see at least one a day.  This boy just wouldn't do it.  He made a liar out of us for quite a while! 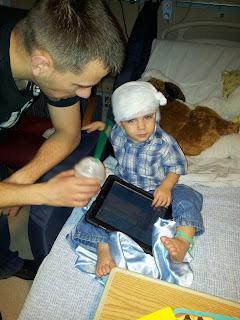 Daddy visited the hospital on the second day and I literally RAN to Starbucks and loaded on caffeine...something about hospitals I just HAVE to have my caffeine!! On the last morning there P.J decided to have a seizure and I was thrilled (only because I knew we were getting the information that we needed to help him).  I wasn't thrilled about the timing...we were sleeping and I heard him grunting and had to hurdle off the hospital bed...I'm sure the EEG tech had a good laugh at the video!We were warned that we may need to stay to at least record three seizures but the doctor came in and told us he got everything he needed from the one he had.  His right side (not quite sure where yet or how big the area is) is seizing sub clinically and when we see the physical seizures it is the seizure spreading to the left side of his brain...which is not a good thing.  We have an MRI scheduled and will be going in for a PET scan in a couple of weeks also.  We have to save the functional spots of our sons brain and since the medication isn't working our other option is another brain resection if operable.  We are hoping that it is a tiny little spot and totally easy to get to and also that if it is operable it will be the last time he has to go under the knife.  Good news though---P.J's medication has been lowered.  He is still on the Topamax, Trileptil, Keppra, and Clonezapam BUT the Dilantin is gone and instead of three times a day he takes his medicine two times a day now! Soooo much better!